Jacob Tolk (Tolkien) In The 15th C. – Link Between The Noble Tolks And Craftsmen Tolkiens?

According to Siebmacher's Wappenbuch (Band PrA, s. 97, fig. 71) Jacob Tolk (Tolkien) from Sollden (Alt Sollau?) living in the 15th century was a member of the noble family Tolck II, Tolkien: 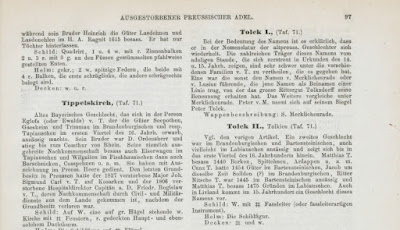 He is a very interesting person because he can be a link between the craftsmen' Tolkien family from Kreuzburg (at least 17th c.) and the Tolk/Tolkien noble family from Tolksdorf and Tolks (14th-15th c.) who have this coat-of-arms: 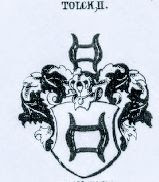 According to v. Mülverstedt ("Ein Geschlecht vom Harze im Deutsch-Ordenslande Preußen. Die Markelingerode in der Grafschaft Wernigerode und in Ostpreußen", Zeitschrift des Harz-Vereins für Geschichte und Alterthumskunde, 1868, s. 245) Jacob Tolk was Nitsche (Clauko, Nickel) Tolk's son. Nitsche was second son of Matthias Tolk von Merklichenrad (the founder of the Tolk/Tolkien family in Prussia?) and we are not sure what were his children' names and which were his goods. He was mentioned as a knight in the documents from 1397, 1414 and 1415. It is possible that Jacob Tolk (Tolkien) from Sollau was his son. Mülverstedt wrote that Jacob Tolk was captured by the Polish forces in 1456. And indeed the German Order documents show that Jacob's goods in Sollau were given in 1456 to a "chamberlain Materne".
As we can see the Tolk noble family lived exactly in the same area as the Tolkien craftsmen' family few hundreds years later... Both families were free – the older Tolkiens were "greater free" and the younger Tolkiens were "lesser free".