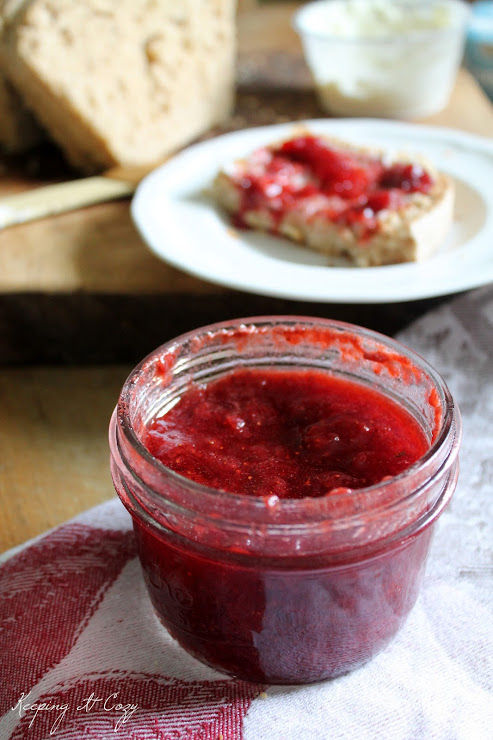 I hope you had a wonderful Saturday!  This past week flew by in a hurry, but a highlight was getting away for a little bit to pick some fresh, local strawberries. 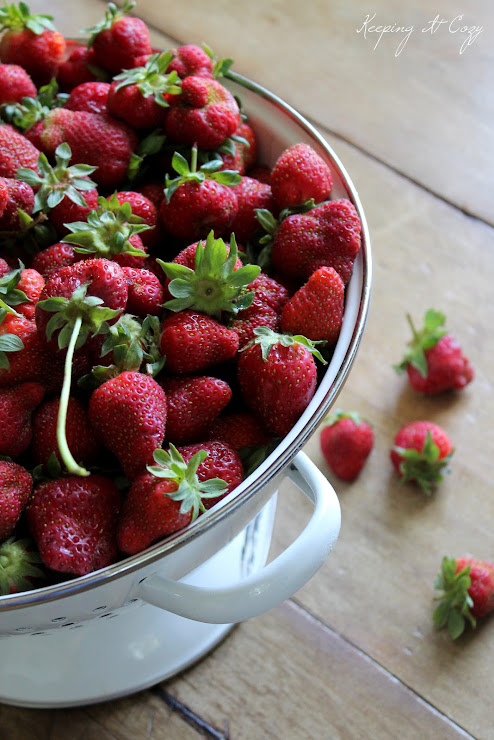 Up until my life here in the south, I had never picked strawberries; several years ago my mom was visiting us and had heard about a local patch.  So off we went one morning and we were utterly amazed by the rows and rows of strawberries... so juicy and sweet we gobbled as many as we could while filling our buckets.  Since then we try to go every year, but it still feels like a novelty every time. 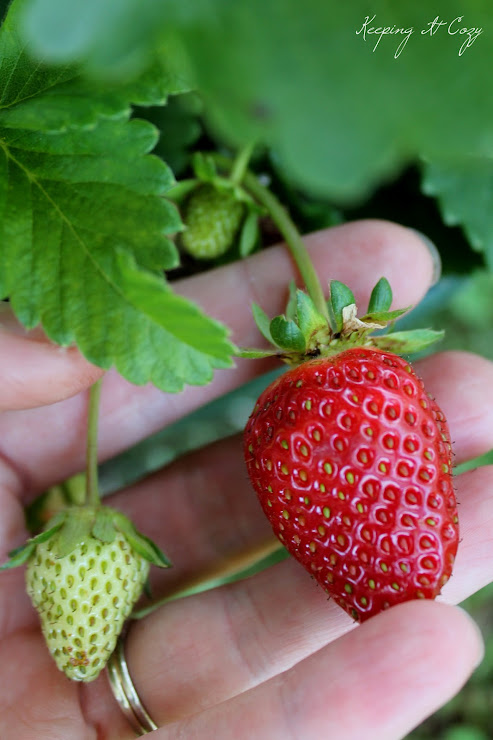 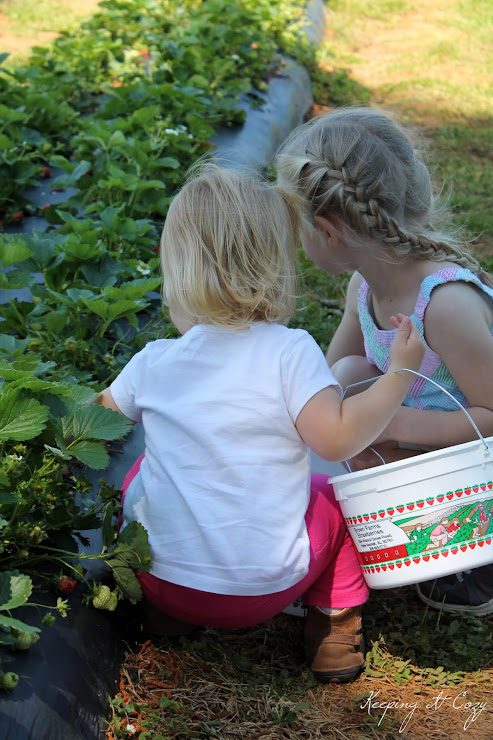 The first time Jillian went to the strawberry patch, she was a tiny little newborn asleep in the stroller.  Now she's old enough to fill almost an entire bucket by herself.  We all had so much fun. 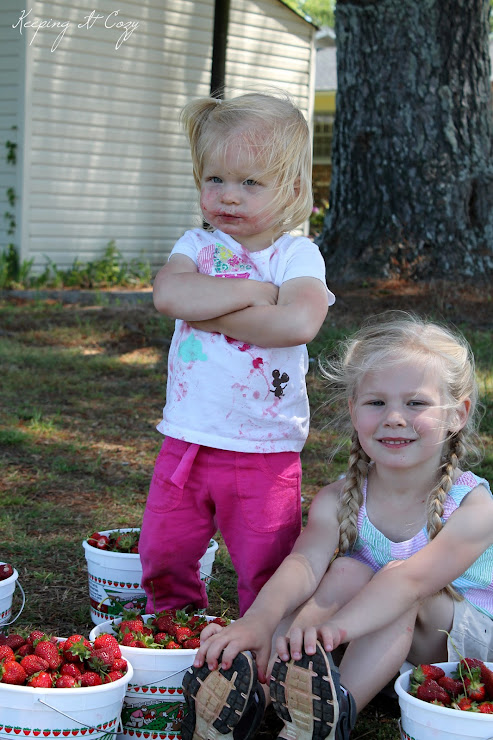 By the time we were finished, the girls were tired and full with strawberries.  I had to include this picture, because Rosetta was absolutely covered in strawberry juice! 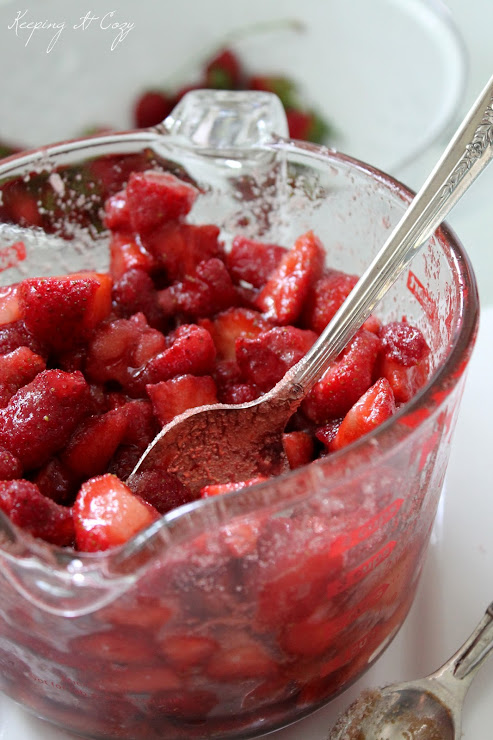 I came home with three gallons of strawberries and then wondered what I had been thinking and when I was going to have enough time to do something with all of them before they went bad!  This week we've had strawberries in oatmeal, on pancakes, in salad and straight out of the bucket.  And every chance I've had I've canned a small batch of strawberry jam. 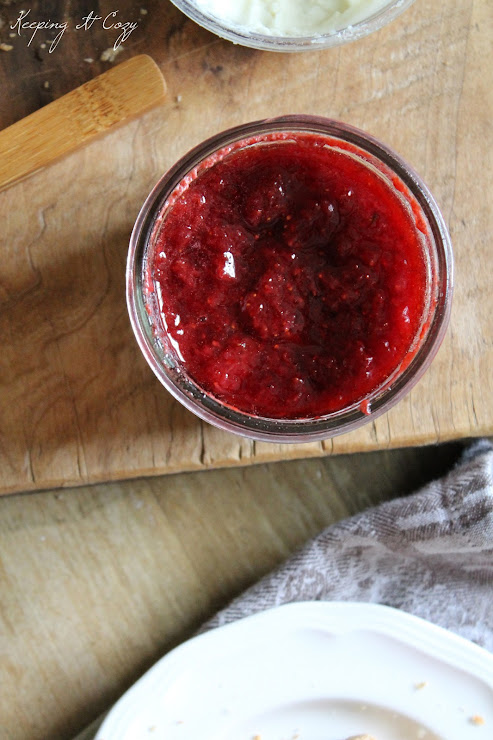 I made some regular strawberry jam with pectin, but I've been wanting to try to make some jam without.  I had also been wanting to try some jam with honey instead of sugar, but I was nervous that it would taste too much like honey, so I compromised and did both. I made a very small batch and played around a little with ingredients and the result was a preserve-like jam that was delicious and full of flavor... it ended up being my favorite and I canned another batch again last night. 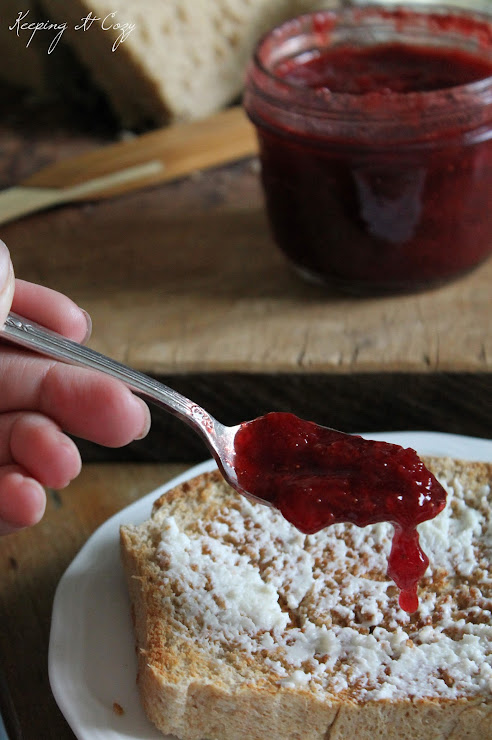 The jam isn't quite as set as one made with pectin, but I was still very happy with its texture.  Canning is something I am still learning, but I really enjoy the process.  I don't have anything fancy in the way of canning equipment and I like to do it in small batches... I suppose I feel like it's a little more manageable... or that if I mess up, it won't be too many jars (smile)! 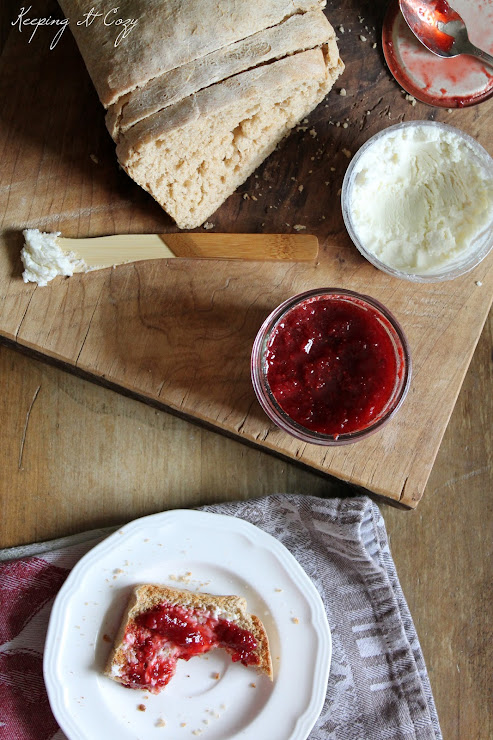 But despite the learning curve, it is so worth it... there really isn't anything better than homemade strawberry jam. 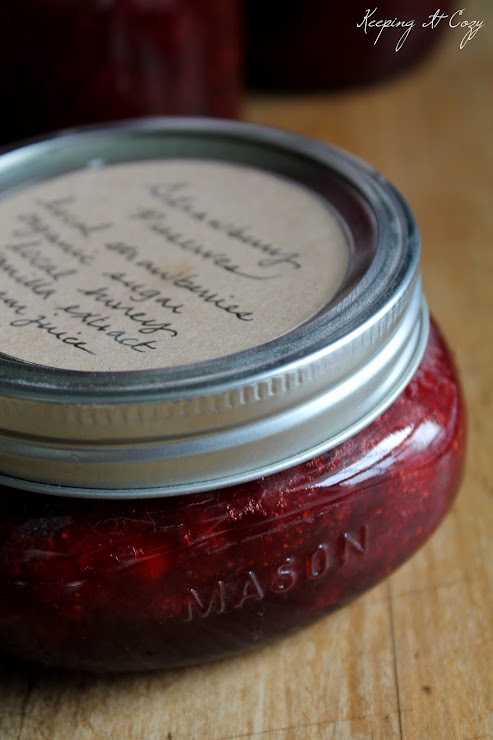 Strawberry Preserves
Heaping 4 cups of chopped strawberries1 cup sugar1/2 cup honey1 tsp vanilla extract1 lemon, juiced and zested
Makes 3 half-pint jars
Chop strawberries and combine with sugar and vanilla extract.  Let the strawberry mixture sit in a bowl while you prepare your jars and lids.  Pour strawberry mixture into a large pot and add honey.  I actually mashed my strawberries a bit at this point, but I should probably tell you to do it beforehand because the pan gets hot!  Bring to a rolling boil over high heat, add lemon juice and zest and continue to boil until the jam is ready (my thermometer broke, so I did a spoon test, but it should be ready at 220 degrees).  Remove from heat and ladle into the prepared jars.  Wipe the rims of the jars, apply lids and rings and process for 10 minutes.
(Note: If you're new to canning, The Pioneer Woman has a great tutorial here.)
Have any of you tried making jam without sugar and honey instead?  I'd love to hear about it!
P.S.  The winner of the Shabby Apple giveaway is Judy.  Thanks for entering!