The Joy Of A Maximalist Home!

I saw this article on BBC Style a few week back and want to share it with you. I personally love objects and their beauty of color, texture, pattern, shape...I was never on a Kondo kick. I can't be, I revel in art and craftsmanship and beauty too much. I love a salon or gallery wall hung with a mass of fascinating art, I love a curated collection of special objects, I love a pile of coffee table books that one can pore over again and again. 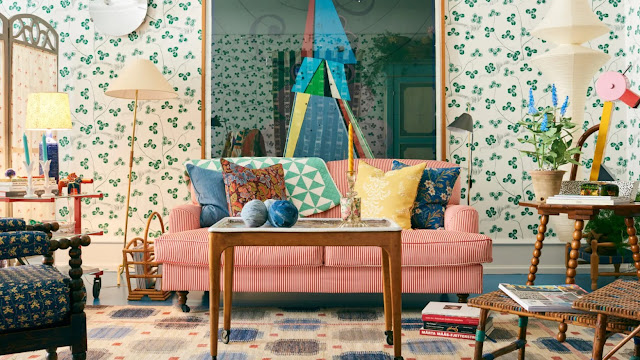 Image credit: The Apartment, Copenhagen
Maximalist interiors full of mismatched stuff are a sign of the times. Bel Jacobs explores the rise of creative chaos at home, and why it makes us feel safe and cocooned.

"I've always been fascinated by all types of objects: toys, illustrated books, postcards, porcelain," says Spanish artist Juanjo Fuentes, who is telling BBC Culture about his fantastical home in the historic centre of Malaga, in which almost every surface is covered by a joyous array of baubles and curios. "I get things from flea markets and I've always been the one keeping the family objects. And I'm very lucky because my friends offer me the objects that belonged to their relatives – they are more minimalist than I am," he laughs.

The rooms are filled with gorgeous abundance: light and pattern, inspiration for both the eye and the mind. Artworks, exchanged with fellow artists, swell the walls. It's no surprise that, when the Centre de Cultura Contemporània de Barcelona (CCCB) was looking for artists to illustrate the act of creative curation, they paired Fuentes with British photographer Martin Parr: "Both collections are generated by compulsive collecting and mass results." That was 2012. Now, nine years later, Fuentes' beautiful eclecticism feels more relevant than ever. 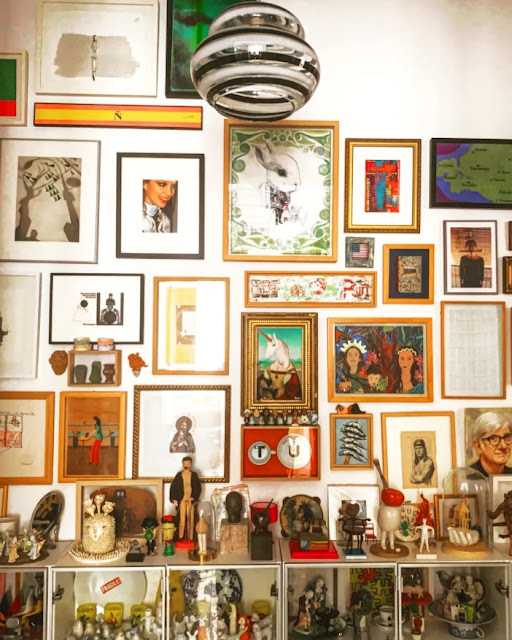 He's not the only one to prefer an eclectic, cluttered approach. Currently, the UK news is dominated by a story about the refurbishment of PM Boris Johnson and his fiancée Carrie Symonds' flat. In an opinion piece, the Guardian describes the look of Symonds' chosen interior designer, Lulu Lytle, as "two parts Raj, one part boho, two parts anteroom from the set of The Crown". For most maximalists though, the look is less specific.

The pandemic has changed the way we relate to the world, re-igniting a love of loungewear as well as indoor glamour, outdoor spaces and even our ideas of society. And it has changed the way we relate to our homes. Once, spaces that we only saw at the top and tails of days have become busily multifunctional: nurseries as well as offices, battlegrounds as well as sanctuaries. For some, that meant clear outs – charity shops are bracing themselves for the flood of second-hand goods – but for others, that has meant surrounding themselves with things they love.

"People are taking this self-swaddling approach, particularly now," says Jennifer Howard, author of Clutter: An Untidy History. "We want to feel safe, we want to feel comfortable, we want to feel protected and taken care of – stuff can act like a literal cocoon." Social media has anointed this new movement #cluttercore, totting up more than 13 million views on TikTok at the time of writing, and more than 7,000 mentions on Instagram. After decades of being told to put our things away, here finally is a trend that celebrates disorder, challenges restraint, and puts maximalism front and centre.

Those imagining week-old cups of tea and discarded pizza boxes associated with the word "clutter" will be disappointed. Even famous scenes of disarray such as artist Francis Bacon's bombsite of a studio wouldn't cut it. Cluttercore offers vibrant (but never grimy) explosions of colour and texture, patterns and prints, kitsch against classic. "'Clutter' suggests something chaotic to me, so it's fascinating to see this sort of intentional approach to clutter," muses Howard. "It's more creative chaos." 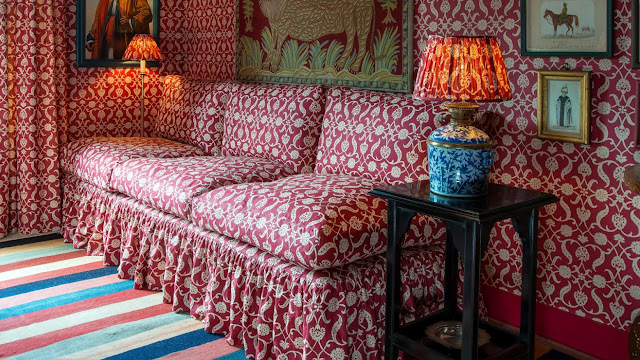 Look up the definition of "clutter" in the Oxford English Dictionary, ("A collection of things lying about in an untidy state") and it feels inaccurate to describe this interiors phenomenon. Cluttercore is not about filling rooms with tat; it's about loving what you already own. In a changing world, where constants are being challenged, cluttercore helps people ground themselves in the material, and in beautiful things that often hark from a more stable past. "There's a real sense of abundance that is appealing right now, given how constricted our lives have become," says Howard.

Fuentes's home is a case in point: a lush exercise in exuberant mismatching in which every piece has its place. In last autumn's issue of Modern House, Alison Lloyd of luxury accessories label Ally Capellino offered readers the "organised clutter" of her home, with its decorated eggs and found objects and the odd quirky touch, like a branch suspended over a fireplace. In this spring's World of Interiors, British designer's Matthew Williamson's Balearic retreat displays a "joyful maximalism". In everything, he asks: "Can I increase the happy factor?"

Founded by Tina Seidenfaden Busck, The Apartment, a design gallery located in an 18th-Century building in Copenhgaen, offers a similar visual joie-de-vivre. Hailed in a recent article in the Financial Times as "one of the pioneers of the mismatched, love-worn look", Busck is a former Sotheby's employee turned art consultant. The Apartment is designed to look like a private home, albeit one that is constantly changing, from which you can purchase anything you see: from the art to the furniture. Nothing "matches" but everything looks spectacularly desirable. 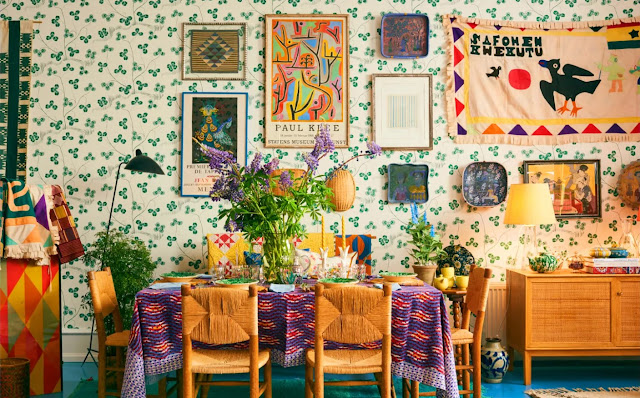 The Apartment in Copenhagen is a design gallery and a pioneer of the eclectic, maximalist look (Credit: The Apartment, Copenhagen)

Vintage exhibition posters may sit alongside coffee tables by Danish designer Kaare Klint, Murano glass chandeliers and an Italian manila rope doormat made by a fisherman, discovered by Busck while on holiday. "If I don't love it, I don't buy it," says Busck. "When I look around my home, there are so many things with different nationalities and dates of origin but somehow it all comes together, so there must be some thread between the things I'm attracted to." The pandemic, she adds, has reminded us that home should be a place "where you are surrounded by things that you love, rather than those you put up with".

And social media provides inspiration. Take the beautiful New Jersey home of @1920craftsman, whose sleek wooden floors are brightened with vintage glass accents and foliage; mid-century cane-work armchairs with burnt orange seats are a Facebook marketplace find, a vintage glass lightshade was bought in second-hand shop. "For me, these objects tell a story and capture the story of our home. They're a reflection of us." 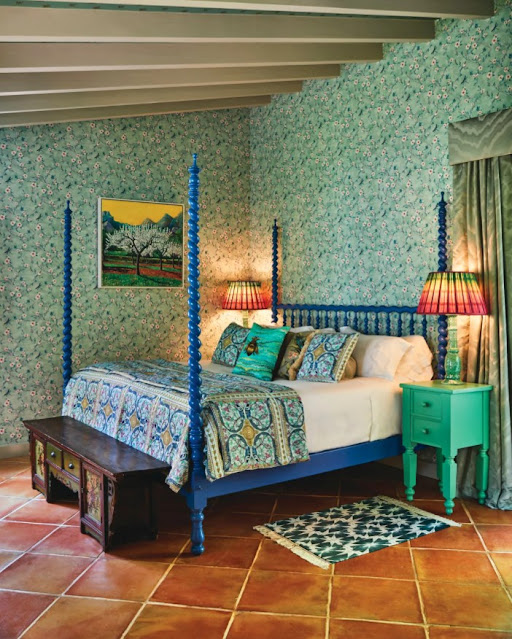 Happiness, exuberance, complexity, storytelling: it's quite a shift from orchestrated minimalism that has dominated design media. Organising guru Marie Kondo has been its most passionate exponent, persuading ordinary people and celebrities to jettison items from their homes that don't "spark joy"; her legacy is continued by blogs and television series including US presenters The Minimalists, whose book Love People, Use Things: Because the Opposite Never Works is due out in July 2021.

It couldn't last forever; apart from anything else, keeping one's house spick and span is hard work. "One personal organiser I interviewed mentioned that a lot of her clients who aspire to minimalism find they just can't live that way," reflects Howard. "Life is not full of spacious surfaces without stuff on them." Advocates of cluttercore, she says, "admit that they have a lot of stuff but that they're going to take pleasure in that and arrange [their items] in ways they like. As a counter aesthetic to the minimalist hegemony, that makes sense to me."

Sometimes, it's good not to do what magazines tell you to. Cluttercore turns ordinary people into curators. It takes real creativity to think about what goes where and what each item says about the other. Plus, decluttering can possess bleaker undertones. "I have a running list of theories," writes Howard. "People organise and declutter to distract themselves from the seriousness of living in the Anthropocene and its existential threats – a burning planet, the Sixth Great Extinction – inoculating us against the pandemic of anxiety." You'll never tidy your house in the same way again.

And there are yet other benefits to maximalism. Richer nations throw away tons of stuff every year, often dumping unwanted items on poorer countries who lack the infrastructure to dispose of them properly, decimating local landscapes. In this context, cluttercore becomes a revolutionary riposte to the explosion of "stuff" driving just some of the problems Howard outlines. 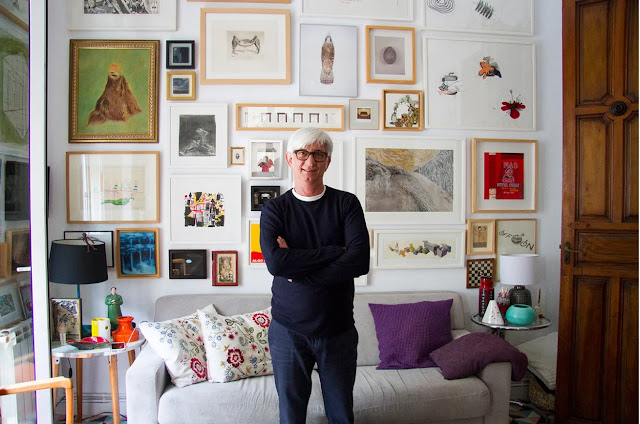 The walls of Fuentes's apartment are adorned from top to bottom with works by fellow artists (Credit: Araceli Martin Chicano)

After plotting the history of poorly made objects and the "resulting crisis of hyper-consumerism" in her new book Loved Clothes Last, Orsola de Castro writes: "As a self-confessed clothes keeper, I am no fan of decluttering." Hailed as "a kind of anti-Marie Kondo," the fashion campaigner describes storing unworn clothes and then digging them out every few years. "The feeling is the same as being contacted by an old, much-loved friend. This year, I rediscovered an incredible midi Shantung silk skirt and have been wearing it everywhere."

De Castro's experience makes it clear: just because an item doesn't spark joy right now, there's nothing to say it won't in the future – which is all the more reason to keep it in front of you. Does Fuentes ever pack away unused items? "It never happens. I know exactly where everything is. Sometimes, as a joke, my family hides things – but I realise instantly." How does living among his objects make Fuentes feel? "I wouldn't know how to live without them. They all have a story. They are part of my life."